We all love Opinel knives, but here are ten things you probably didn’t know about them…

1. The simple peasant’s knife quickly proved popular, with hundreds of thousands of knives being sold by 1914. By 1939 an incredible 20 million knives had been sold – at the time, enough for half the population of France to own one! The company is still run by the Opinel family, selling an even more incredible 4-5 million knives a year!

2. The curve of the original Opinel blade is based on the yatağan – a traditional Turkish knife or short sabre.

3. In 1985 the Victoria and Albert Museum in London selected the Opinel as part of an exhibit celebrating the ‘100 Most Beautiful Products in the World’. Opinel featured alongside the Porsche 911 and the Rolex watch.

4. Eighty percent of all Opinel knives use traditional beech wood for the handle. Other handles include oak, walnut, ebony, rosewood, bubinga, aluminium and African cow horn.

5. The locking collar (Virobloc) was patented in 1955 by Marcel Opinel. Originally it locked the opened blade only, but this was later improved to safely lock the blade when closed.

6. The construction of the current production Opinel knife is very simple, consisting of only five components.

7. Pablo Picasso used an Opinel knife to carve his sculptures.

9. The blades are made out of two materials; traditional high carbon steel (Carbone) – which sharpens easily, holds a good edge, acquires a unique patina can be used to create sparks when struck against flint, or the more modern stainless steel (Inox) – which doesn’t corrode.

10. For a truly French experience use your Opinel mushroom knife to harvest mushrooms from your local woodland. Gently clean the mushroom using the brush on the end of the handle. Fry them up in the field – sliced of course with your No8 Opinel folding knife. Serve with delicious chunks of baguette and saucisson thinly sliced with… yes, you got it, your favourite knife!

We don't sell knives at Ski Weekend, but if you want a ski break that's as good quality as an Opinel knive, then contact us for more details. 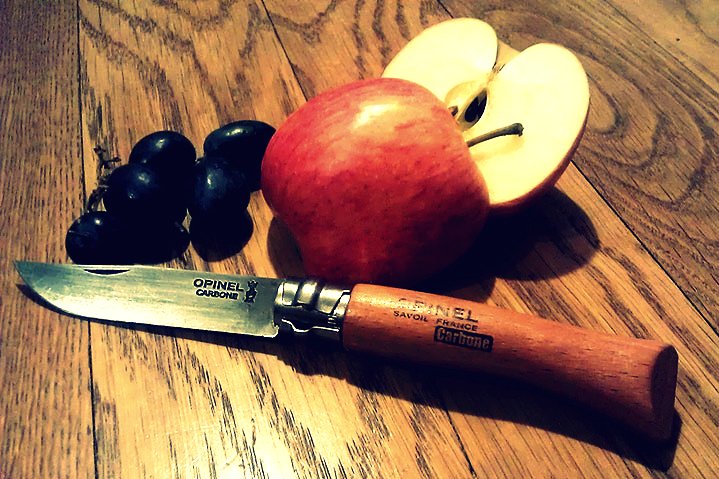