The Col du Passon (3028m) in Chamonix is an excellent ski touring route with a good ratio of skiing/climbing. This article covers the route, timings and tips. Expect the ascent to take 2-3 hours and descent 1 hour 30 minutes.

Starting in Argentière, the best option would be to get a one-way ticket to the top of the Grands Montets (3283m).

However, with the top station due to remain closed until the 2021/22 season at least, then access the Glacier d’Argentière by climbing up 350m from the top of the Bochard telecabine lift then to a track leading to the glacier.

From the top after your climb from Bochard to the Col de Rachasse and looking NE, the Col du Passon is the small notch left of the Aiguille du Chardonnet directly opposite you.

From here descend the Glacier des Rognons and cross the Glacier d’Argentière. There is a small weather station on the other side of the glacier, which acts as a good landmark for the starting point of the ascent.

The moraine is 10-15 metres higher that the glacier here and is directly below the Col at the start of the couloir.

Click the image below to see a larger version of this map. Please note that the route on the right via the Col du Chardonnet is no longer possible.

Be mindful of avalanche risk

Whichever route you choose, while the climb is fairly short there is a risk of avalanche on both the climb up the south-facing slopes and then ski down on the west-facing slopes – particularly in the afternoon - so you avoid a late start.

The skinning tracks eventually reach a point where it becomes steeper and you will need to take off your skis.

Use crampons in hard snow

Although generally not particularly difficult or long, the challenge of the climb up the couloir will depend on the snow conditions.

If it is soft, then many people continue in boots using ski poles. In hard snow crampons and an ice-axe will be a significant advantage.

Take care on the descent – ski with a guide

Once you arrive at the Col du Passon (3028m), the 1600m vertical descent is skiers’ left via the Glacier du Tour. Route finding is not trivial, so either ski with a guide or prepare well and have a map and compass.

Once you have Le Tour in your sights the exit from the glacier can be made though one of several couloirs. Be careful of going too far skiers’ right because there are some blind exits with seracs at the foot.

We generally head to the middle-right and avoid the far left-hand side, which later in the season is often slushy with heavy snow on a steep track.

It is important to take care on the lower slopes as conditions do vary and there are many obstructions including cliffs and deep rocky gullies. Avalanche is a particular risk on these sunny west-facing slopes.

In good conditions this is one of the Chamonix classics so it should be high on your bucket list.

How long will it take?

On a good day the ascent will take 2-3 hours in total with about a 30-minute descent. A serieux (large beer) is an essential way to finish the day (at the Olympic restaurant or the restaurant Passon) before taking the Chamonix ski bus home.

Equipment should include the usual avalanche gear, plus harness, crampons, ice axe, skins, packed lunch and sun-cream and a hat for spring ascents.

Book a guide for the Col du Passon route 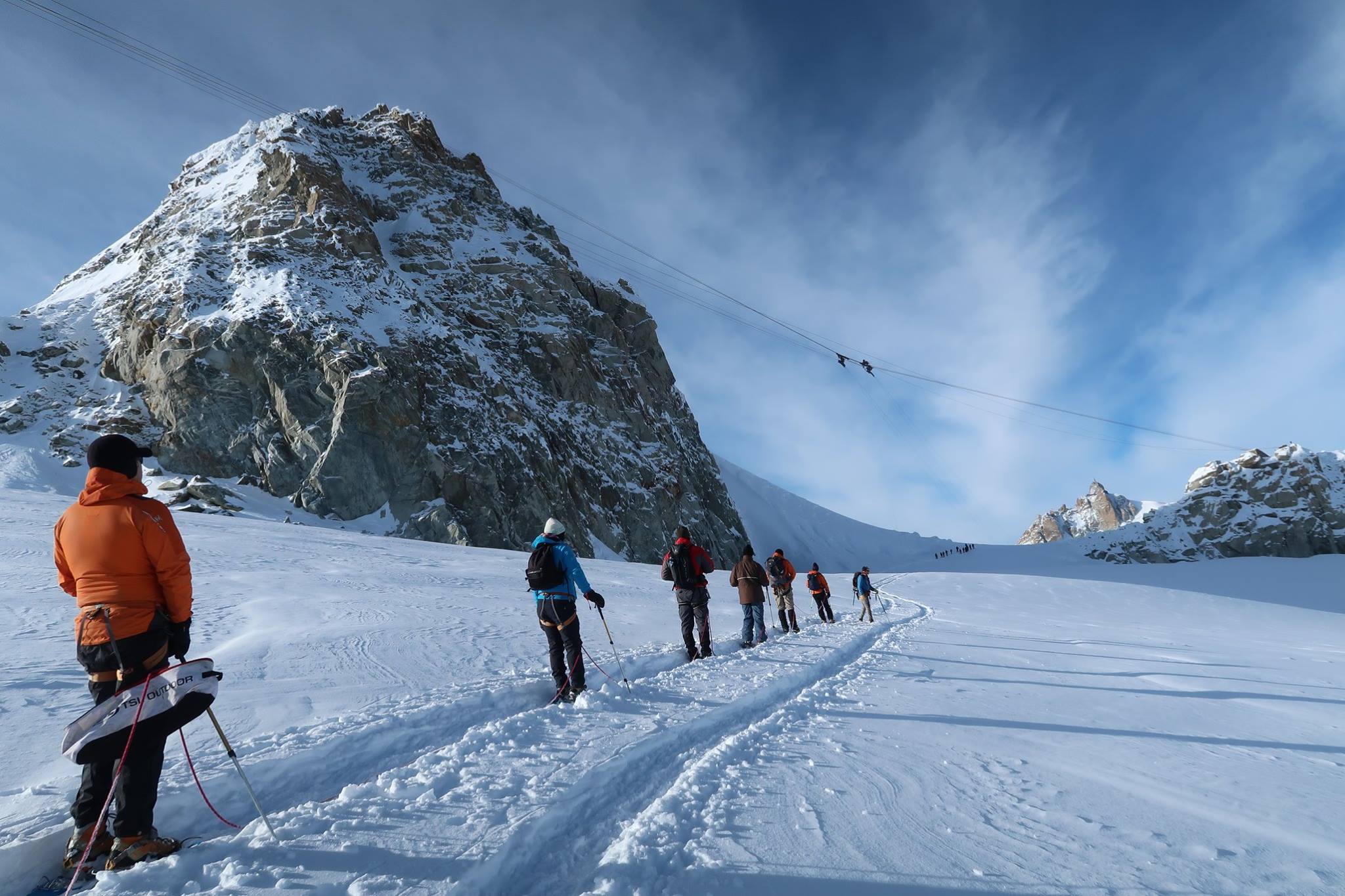