The History of Chamonix in Ten Vintage Postcards

Located at the foot of Europe’s highest mountain, Mont Blanc (4809m), Chamonix has been a destination for travellers since the 18th century, hundreds of years before any ski lifts existed.

In this post, we share ten vintage postcards that help to tell the story of Chamonix in those early years.

Mont Blanc was first climbed by local guide Jacques Balmat and doctor Michel Paccard in 1786. This postcard features the famous statue of Balmat pointing out the route to the summit of the ascent to their patron, the Swiss scientist Horace-Bénédict de Saussure.

You can find this statue today in Place Balmat, offering exactly the same view as the climbers enjoyed almost 240 years ago. 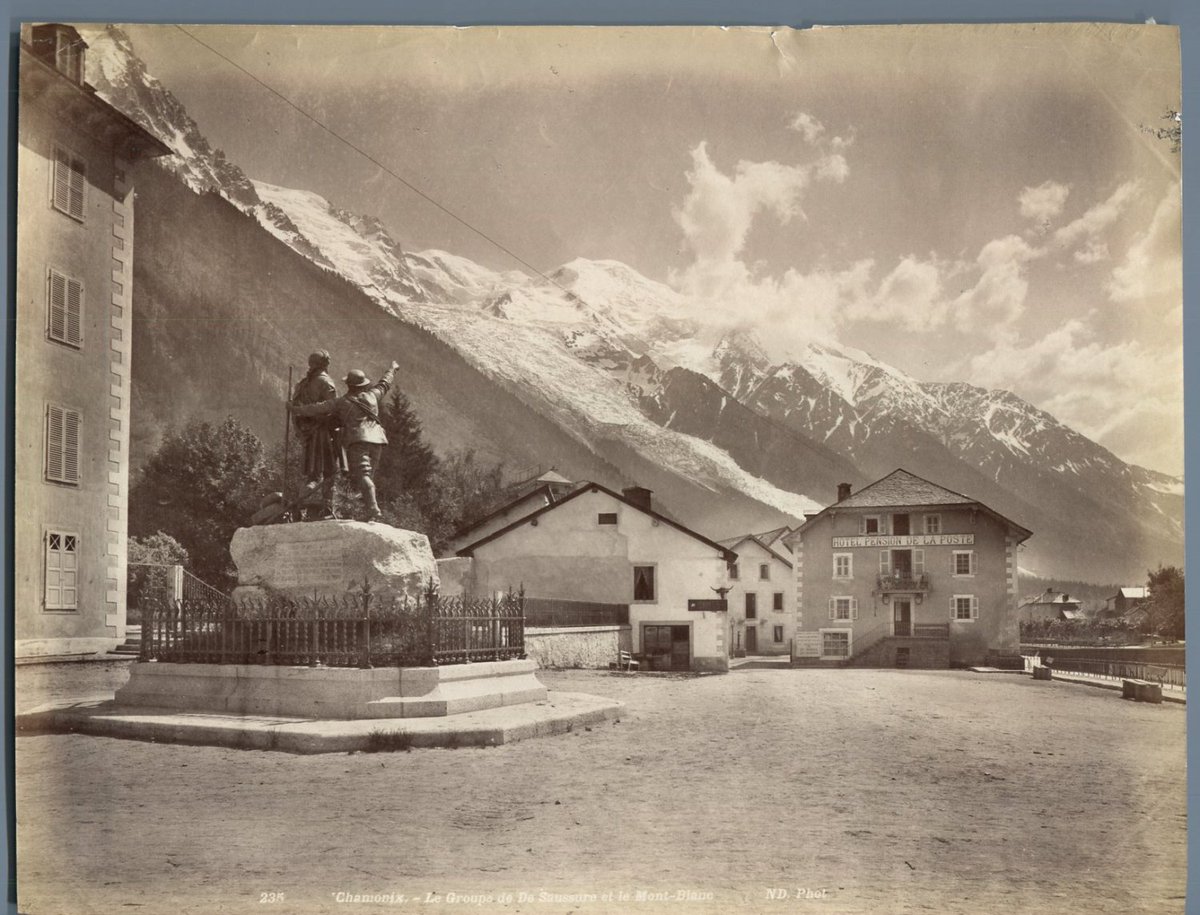 Time hasn’t been kind to this photo, but look closely and you can clearly see the Glacier des Bossons stretching almost to the valley floor, as a horse-drawn carriage brings some early tourists to the town. 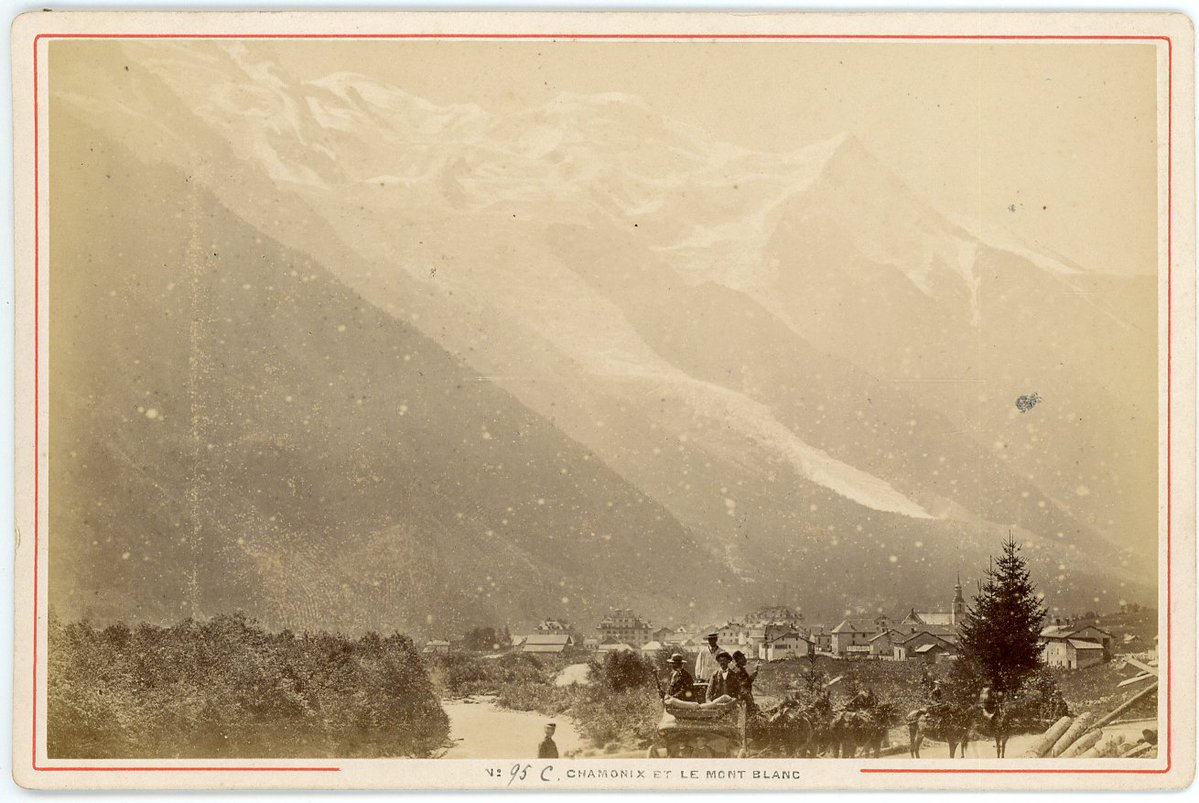 There has been a church on this spot since 1119, when Benedictine monks built the first iteration. This Catholic church now hosts services every Saturday and Sunday.

Prompted by the opening of the railway line, the first decade of the 20th century – the Belle Epoque - saw a huge demand for large, high quality hotels.

These new buildings in Chamonix were known as ‘Grand Palais’ and the first to be constructed was the Savoy (now the Folie Douce), followed by the Majestic in 1903, although it was not officially inaugurated until 1919 after the WWI.

The building was sold off as separate private apartments in the 1960s and the ground floor is now a conference area used by the city council. 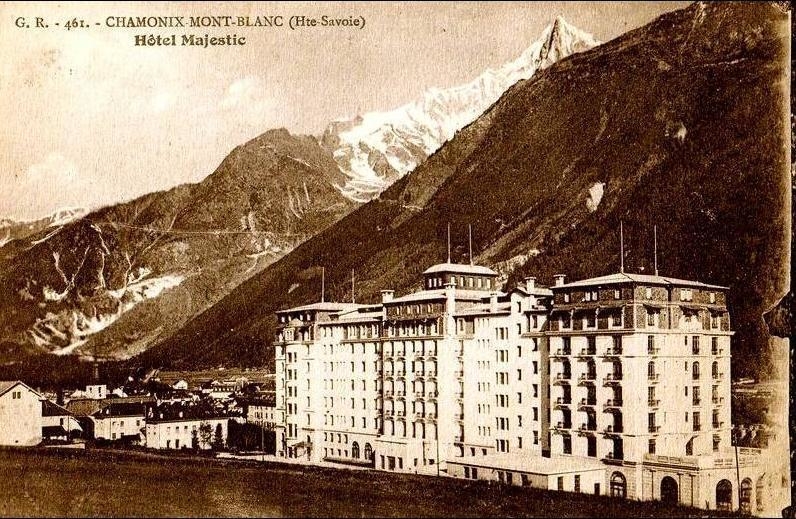 Almost Chamonix appears to have changed very little (since the 1880s photo above) in this colourized view of the ‘town’, two key changes in the early 20th Century led to a rapid increase in visitors.

Although it can’t be seen in this photo, the opening of the railway line between Saint Gervais and Chamonix in 1901 made access simpler and quicker. The rail connection from Martigny in Switzerland opened in 1906.

This was followed by the opening of the Montenvers cog railway to Caillet in 1908, with an extension to the top in 1909. 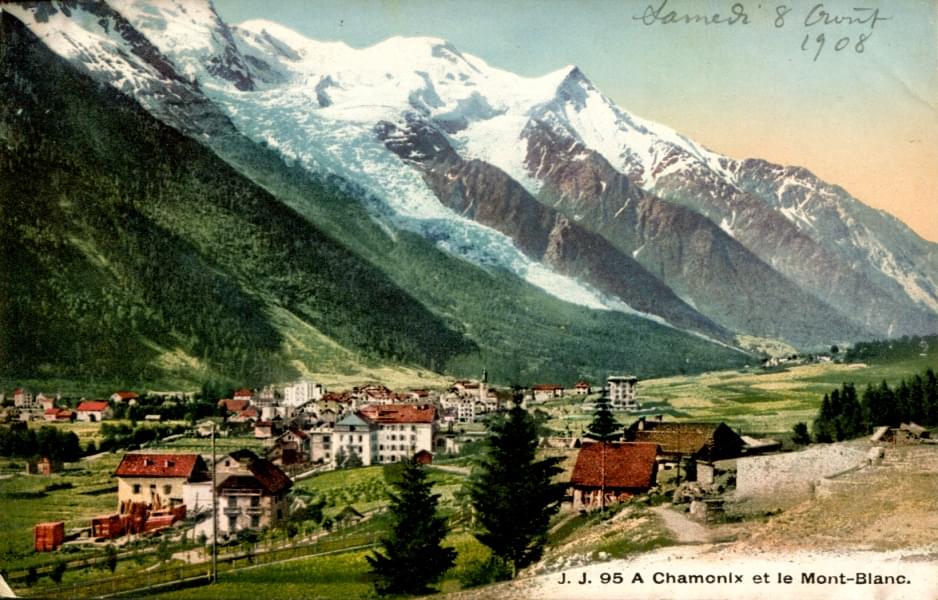 The British have been exploring the Chamonix valley since mountaineers William Wyndham and Richard Pocock ‘discovered’ the Mer de Glace in 1741.

Thought in local legend to be the abode of witches, their reports back to The Royal Society popularised the town as a destination on the ‘Grand Tour’ favoured by the British upper classes. 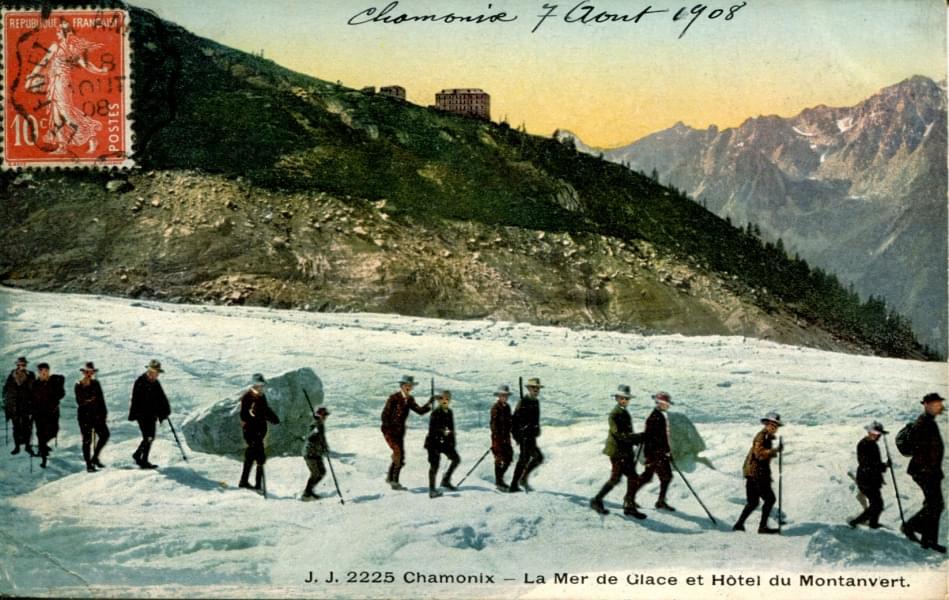 The ‘Chamonix Palais’ was the third Grand Palais to be built in Chamonix, after the Savoy and the Majestic. It opened in 1910 and still exists today, hosting the excellent Alpine Museum in this mainly residential building. 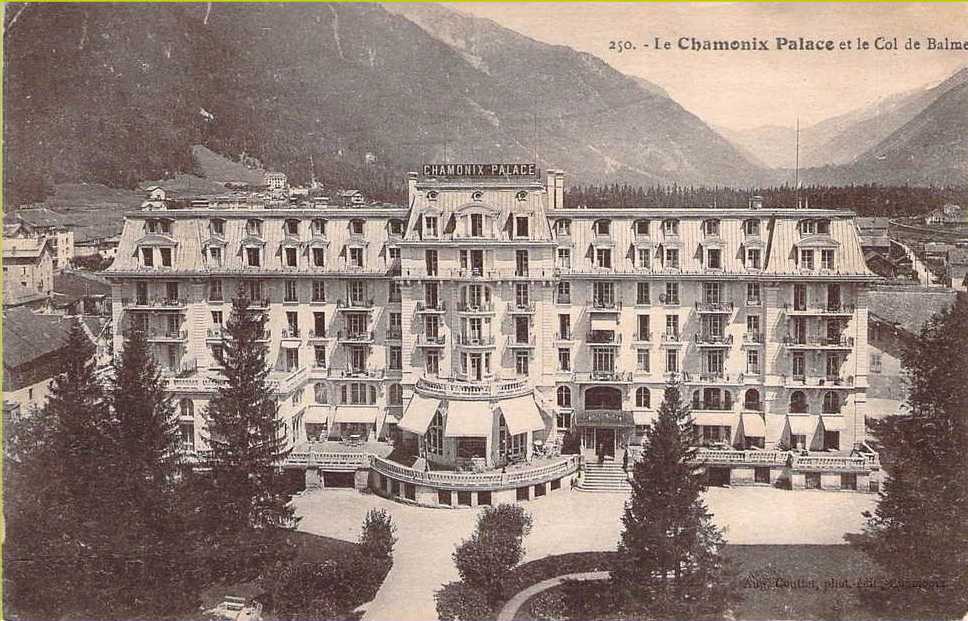 The highest mountain in Europe at 4807m, the first successful ascent of Mt Blanc in 1786 opened the way for generations of mountaineers.

While not as technically difficult as smaller four-thousanders in the Alps, this peak straddles the border between France and Italy (where it is known as Monte Bianco) and remains ever popular with climbers.

‘Rue Nationale’ is now known as Rue du Dr Paccard, after Michel Paccard, who first summited Mont Blanc together with Jacques Balmat in 1786. The buildings have changed over the years, but the mountains remain the same, as this more recent photo shows. 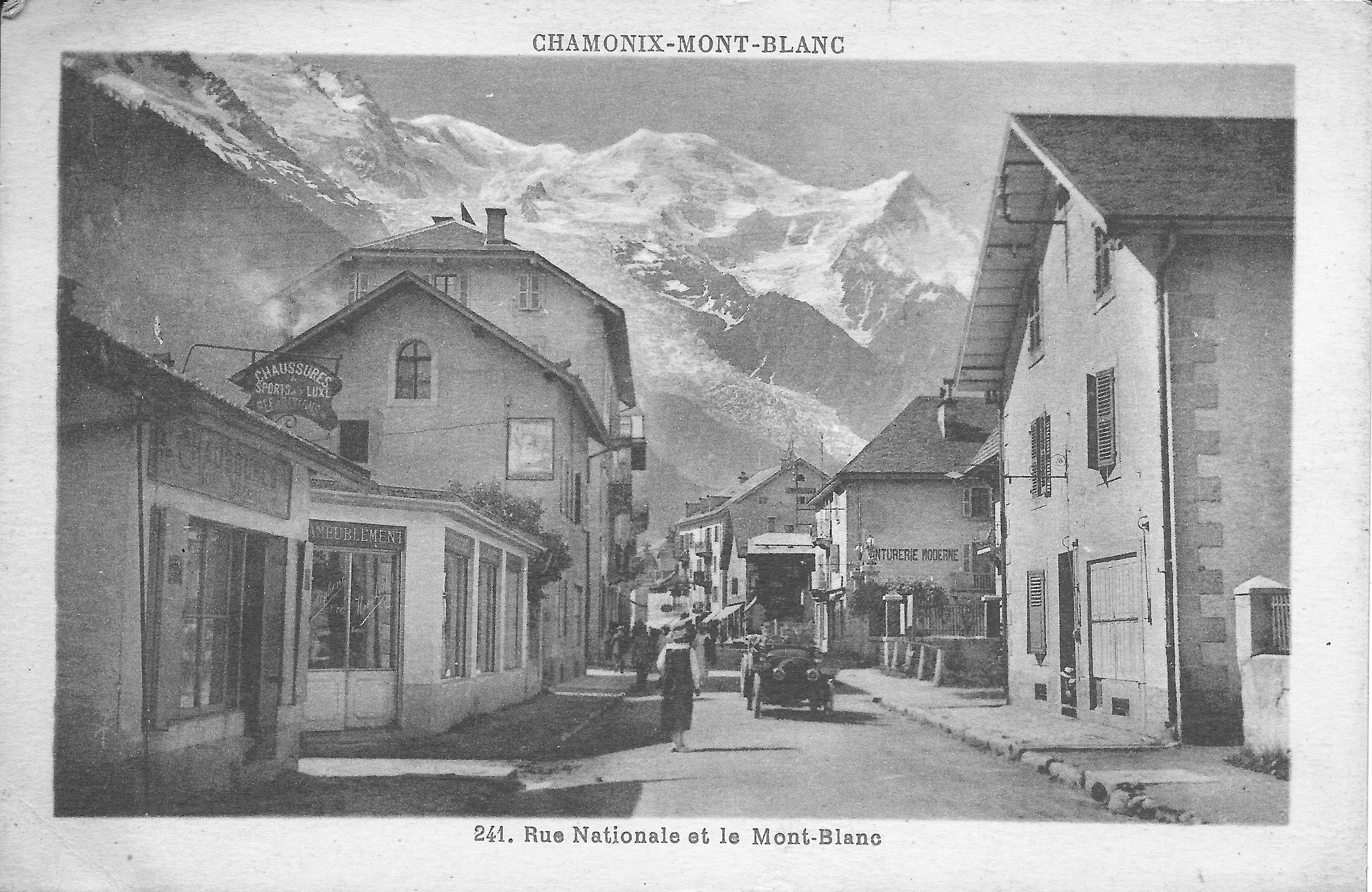 The refuge was first built in 1880 for the new wave of tourists arriving to admire the Mer de Glace. At the time the only way to visit was to walk or travel by mule, both fairly demanding and time-consuming journeys, hence the need for somewhere to rest and recover on the mountain.

The Refuge is now a fully-refurbished hotel, with a magnificent terrace and a key part of the Montenvers experience. 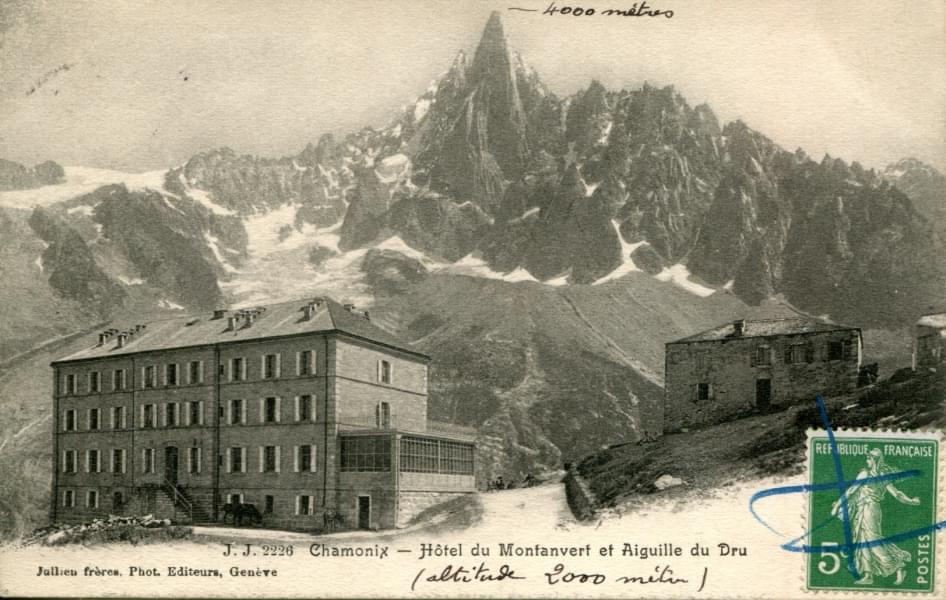 If you’d like to come and discover Chamonix for yourself, Ski Weekend can help find your accommodation in winter and in summer.

Simply call our team on 01392 878 353 or contact us via our website and we will be delighted to help you be part of Chamonix’s history yourself.