A History of Architecture in Chamonix

While Chamonix is best known as a ski and summer adventure destination, with a list of activities to get your adrenaline pumping, the rich variety of styles of architecture in Chamonix might surprise the casual visitor.

On an afternoon off, why not enjoy a casual stroll around this magnificent town and take in some of the impressive man-made sights that accompany the dramatic peaks surrounding you – you could be very surprised.

From the Golden Age and the Belle Epoque via Art Deco to Brutalism and the Modernism of today, there is plenty to discover in Chamonix.

The so-called ‘Golden Age’ of architecture in Chamonix dates back to the mid-19th century to the start of WW1 in 1914.

Standing in the central square of Chamonix, if you look across the Arve you’ll see the town’s casino.

This was first constructed in 1848 as the ‘Royal Hotel’, at a time when the Savoy was part of the Kingdom of Sardinia.

It only returned to France after a politically convenient plebiscite in 1860, shortly after which the hotel welcomed Napolean III as a guest.

This complex history makes the casino one of the few ever examples of the unlikely sounding ‘Sardo-Chamonix Neo-classicism’ (!) 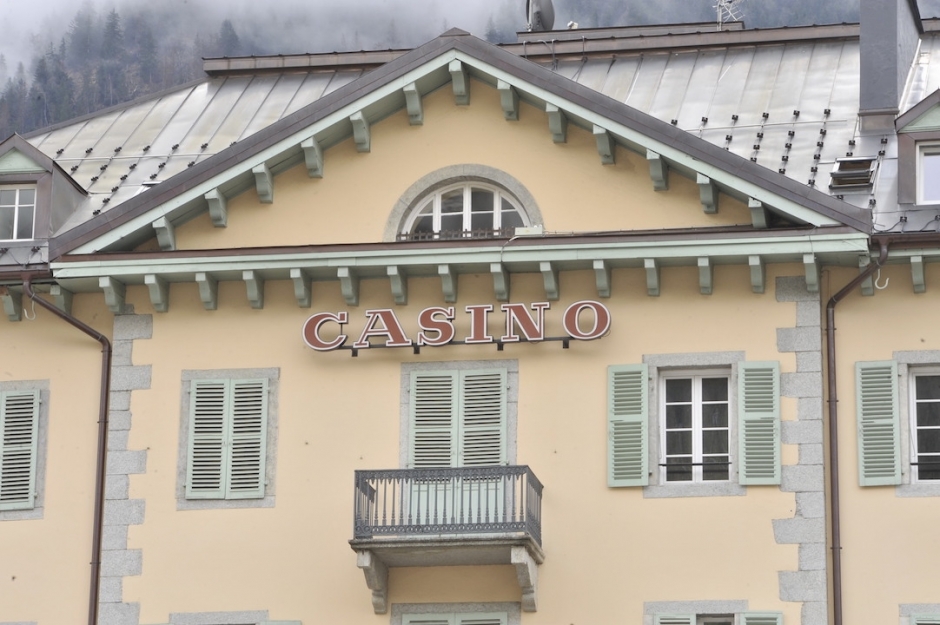 The huge art nouveaux windows of Café La Terrasse, which look out over the river and Mt Blanc, are another wonderful example of this era.

Admire the view but also the next time you are there, but take time to observe the building itself.

The first decade of the 20th century saw a huge demand for large, high quality hotels in Chamonix, known as ‘Grand Palais’.

Prompted by the opening of the first railway line to the resort in 1901, it was only three years later that the ‘Savoy Hotel’ opened in 1904.

Visitors to Chamonix will know this property well as it still accommodates guests in its current guise as the first Folie Douce hotel. It previously operated as a Club Med. 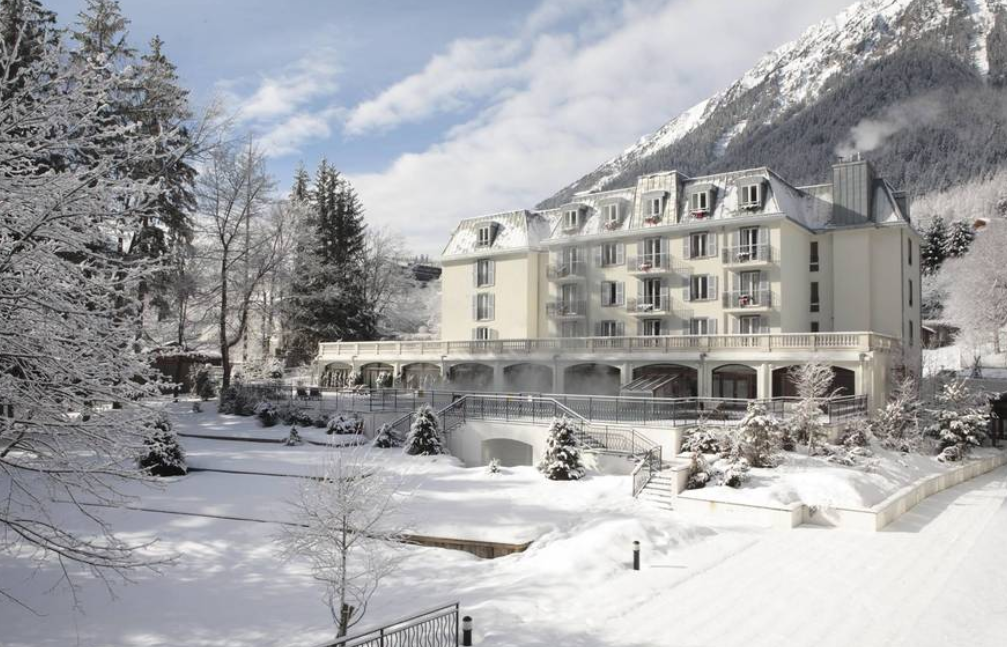 The Savoy was followed by the ‘Majestic’, which opened in 1903. Development was not smooth, and the building was sold off as separate private apartments in the 1960s, with the ground floor now a conference area used by the city council.

The ‘Chamonix Palais’ was the third Grand Palais in resort, opening in 1910. Today you can enjoy a visit to the excellent Alpine Museum in this mainly residential building.

As fashion moved away from the Grand Palais, Chamonix saw increased demand for villas – more like an aristocratic ‘home from home’ than a large hotel.

The early part of the 20th century saw around twenty of these impressive ‘mini palaces’ built. Mainly built of granite, over a large acreage, these villas typically had large sculpted gardens and separate buildings for staff.

Built in the 1920s, there are some lovely examples of Art Deco in Chamonix – an era of perfect lines and elegant balconies and doorways.

Look out for the Banque de Chamonix Paul Payot et Fils. The bank was founded in the 1870s and grew quickly, changing money for British tourists. Its success was reflected in the construction of the new bank in 1927 in an Art Deco style.

You can read a detailed history of the Payot family and buildings on the site here. 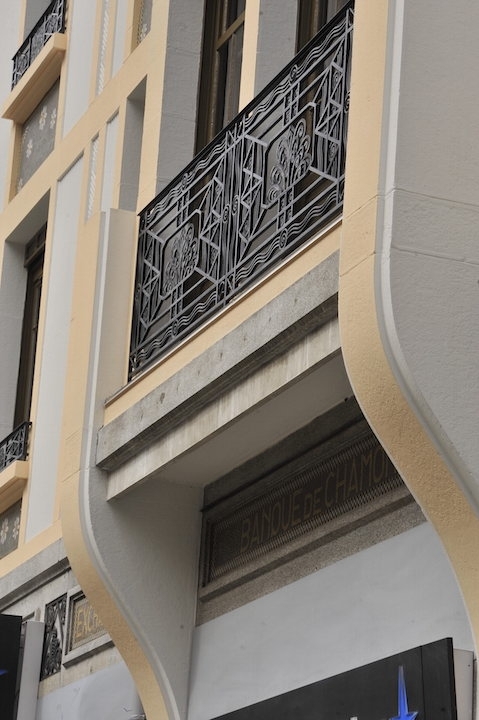 As ski resorts became more popular from the 1950s, the ‘Third Generation’ of purpose-built ski resorts such as Flaine and Tignes were built. These new resorts followed the most popular style of the time – ‘brutalism’.

This generally means buildings made of concrete and the word actually derives from the French expression 'Béton brut', which means ‘raw concrete’.

Brutalism was a response to the fact that tourism had moved away from the original upper-class travellers who would stay for months at a time. Following WWII there was a pent-up demand for travel and solutions were needed for a new generation of people who wanted to explore the new world.

‘Mass tourism’, as we understand it today, needed more affordable prices. And the simplest way to achieve this was by building bigger hotels with smaller rooms.

Many of these buildings in Chamonix have already been renovated or replaced but look around the resort and you can still see hotels reminiscent of this era such as the Pointe Isabelle.

Chalets have been traditional buildings in the Alps for centuries in the world of farming.

With rooms for people above a ground floor designed to hold cattle in winter, ‘underfloor heating’ was an earlier development in the Alps than you might expect.

These agricultural buildings had no running water or indoor toilets. It was only at the Exposition Universelle in Paris in 1900 that Switzerland exhibited their ‘chalet’ – a new style of house that looked like existing Alpine chalets, but with ‘mod cons’…and no cattle!

Henri-Jacques Lemans, an architect from Megeve, built the first ‘chalets’ as we understand them today. These are all over Chamonix, with perhaps no better example than our own Chalet Les Jumelles.

There are some superb examples of stylish modern architecture in Chamonix.

We’ve written in detail before about the magnificent QC Terme spa, which opened in December 2018. We recommend a visit to relax your muscles, but it’s so well designed, it’s worth going simply to see the building.

Another impressive modern building is the copper-covered fire station. This was designed by Studio Gardoni Architectures and opened in 2016. It aims to “render invisible the way we normally see a fire station.”

If you’re a mountaineer, you may also have seen the Refuge du Goûter. This space-age building was opened in 2013 and looks more like R2D2 from ‘Star Wars’ than a traditional mountain hut. At 3835m, it is the highest manned refuge in France. 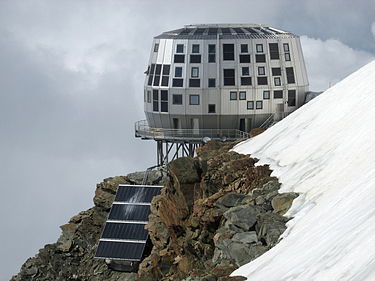 Hopefully this will add to your next visit to Chamonix and you might look at more than just the mountains of our favourite resort.

If you’d like to go on a Ski Weekend this winter, then please contact our team on 01392 878 353 and we can help find the right property (and architectural style !) for you .